You are  currently viewing the desktop version of the site.  Switch to mobile version here.

How You Can Help Us

(meat based in jelly,

no fish or gravy)

the delivery address is :

news page. You can also catch up

on our latest news by following us on Facebook.

I’m very, very late writing my summary of 2019 but to tell the truth, it went by in such a blur that I can’t remember most of it!!.<Read more> 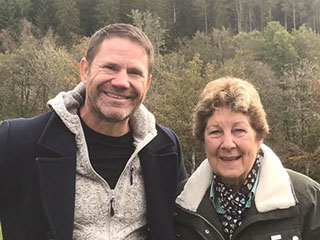 Hello again friends, I’m sorry to be so late giving the revue of 2018, the work load seems to get heavier every year, or is it me getting older? Probably a bit of both. <Read more>

What can I say about 2017? Once again, like the year before, it went in a blur. Lots of things happened but as it was so very, ridiculously busy that one event overtook the other. <Read more>

Clare Sterling, Communications Officer for the International Fund for Animal Welfare (IFAW) has posted a lovely piece on their blog about Joan and her work with hedgehogs... <Read more>

September 2016 - This wonderful video was made for West Midlands Hedgehog Rescue by our kind supporters Rob and Tanya:

Well, top that, what a year!!!  Busy, busy, busy! There can never be another twelve months like this last one has been. I have not only taken in more sick, injured and orphaned hedgehogs this year than ever (500 in fact). It's been TV, radio,and journalists seemingly none stop... <Read more> 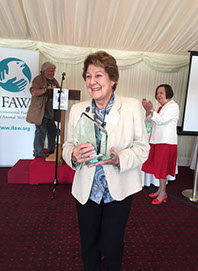 Read more about Joan and her award:

- Woman to be honoured for rescuing thousands of hedgehogs, ITV News 19th Oct 2015

Joan and the Friends of West Midlands Hedgehog Rescue would like to thank everyone for their overwhelming support at this year's Open Day on 5th September. Again the event was generously hosted by The White Horse pub in Cheslyn Hay and many thanks to them for their support. We raised an amazing £1700+ total and this will very much help the hedgehogs in our care this Autumn and Winter. A wonderful day - well done everyone!

Joan and her work at West Midlands Hedgehog Rescue

featured in the new ITV1 Series "Nature Nuts with Julian

Clary" made by Oxford Scientific Films.

Here are a few clips:

- A Trip to The Vets

- Releasing a Hedgehog Back to the Wild

The intention was to update this website every three months

So far it has been a busy year, no more than usual I'd say, but

it is definitely hotting up ... [read more]

Well what a strange year it has been so far. The hedgehogs

have just kept coming in, and they are nearly all

At long last I have control of my own web site. For years its

been, "Ill do it, its too difficult for you" but no one ever