Hello again friends, I’m sorry to be so late giving the revue of 2018, the work load seems to get heavier every year, or is it me getting older? Probably a bit of both.

Last year just rolled on with nothing really major happening on the hedgehog front, the only really big happening was the drought.

It was such a worrying time, I felt helpless knowing that all kinds of wildlife were suffering and dying from lack of food and water. I kept putting out appeals to all and sundry to ask the public to help. I was emailing, writing, messaging, and phoning the radio, MP’s and newspapers but still very sick dehydrated hedgehogs were coming to me along with tiny baby hedgehogs whose mothers had either died or had been forced to desert their offspring because they simply could not feed them.

It was heartbreaking , I hope to heaven we don’t have to live through that again.

Apart from that I welcomed many new hedgehog admirers who had either got hooked on hedgehogs after bringing sick, injured or orphaned ones to me, or had been to one of my talks and offered their help.

I rely very much on people picking up needy hogs for me  and also on kind donations of newspapers, food and other essentials, I’ve even had businesses hold fund raising events for me to raise much needed funds.

Well, it looks as if I am drifting into my 'Thank You's' and, as I have said before, there are so many people who do help, continue to help and new folks who are at this moment helping, one of whom is Wayne who has just replaced one side of The Hosprickal’s hutches, that’s a lot of hutches!! The other side is waiting to be done. Then Martin comes along and takes away the old hutches in his van. See what I mean, kind people who often offer to help without being asked.

After 17 plus years I now have a perfect team along side of me and behind me, including you Annerley who I can’t possibly do without, go on, have a giggle! (Annerley is in awe and wonder at my methods of using a computer and takes care of this website for me).

Top of the list of 'Can't Do Without’s' are of course the vets, nurses and staff at E.C. Straitons and Partners Veterinary Hospital.

As well as all of the old faithful helpers and donors are the fairly new ones like Anna and her staff at Cuan Wildlife Rescue who stepped forward to help me nearly 2 years ago when I was in dire straights, someone  must have been watching over me because I didn’t ask for their help, it just came with a phone call from Anna herself. Bless you and thank you Anna, your team, and Val, Hannah and Sky.

It’s no good trying to name all of you, I’d be here forever, all I can say is, Thank You, and you know I mean it. 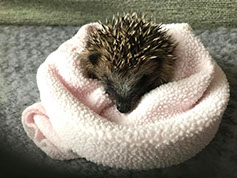 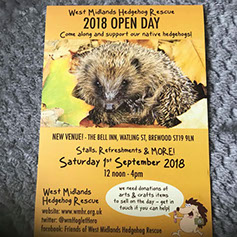 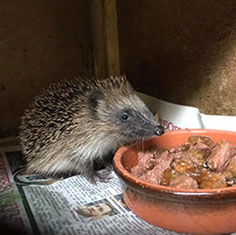